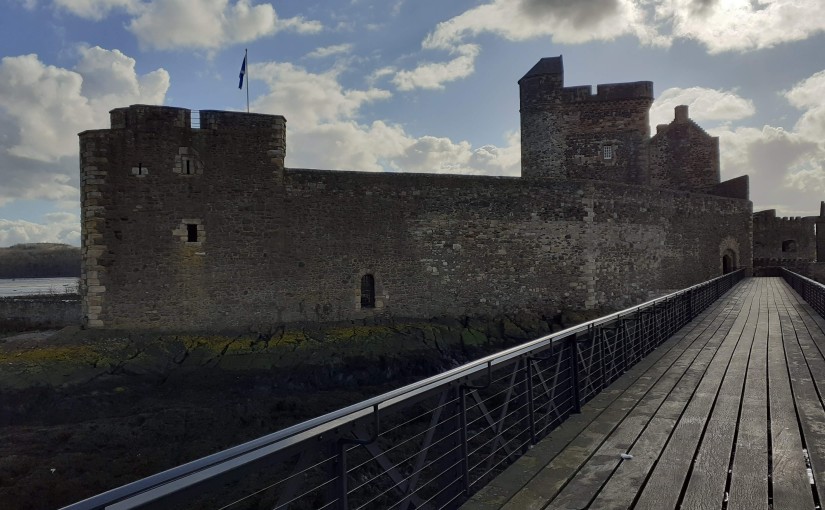 Day trips are wonderful. I think I sometimes enjoy them more than full blown holidays. You wake up, head off somewhere new, get a cracking lunch, wander around enjoying yourself and then are back at home in time for dinner! Throw in some nice weather, a cute dog or two, and a nice spot to knit, it’s a special treat of a day.

Before I make it sound too idyllic, it was still freezing cold. I was wrapped up in a hand-knit jumper and hat, and was wishing I’d thought to wear hand-knit socks. To steal a line from Charles Dickens, ‘it was one of those March days when the sun shines hot and the wind blows cold: when it is summer in the light and winter in the shade.’ And, as this was Scotland, the wind was often blowing.

My life at the moment still has studying for exams at its core. Even with the week off from work, I’ve spent most days with my head bent over my notes. I don’t actually mind it too much. However, over the past week, Edinburgh has transition to spring from the dark days of winter. Suddenly, it didn’t seem like madness to take a walk outside as a break, instead of remaining inside under two blankets.

I still picked an easy day out. Linlithgow is only a 20 minute train ride from Edinburgh. As it’s on the route to Glasgow, the trains run every 15 minutes making it ideal as an leisurely day trip. The town itself is structured around the high street which is right next to the train station. There’s a plethora of shops and cafes including a quilting store and an excellent bookshop. I, however, headed straight to Linlithgow Palace.

The birthplace of Mary Queen of Scots, the castle is now a grand ruin set beside a beautiful loch. And, as a great many people wanted to tell me, it’s used in the filming of Outlander as Wentworth Prison. I admit, I have enjoyed both the Outlander books and the TV show. It was a little surprising to me that they chose to include Linlithgow Palace as something other than itself in the show.

The palace has quite a remarkable history. Scotland had a dispute over who should be King in 1290 and, rather inexplicably, asked England to help sort them out. What happened next almost doesn’t seem like a surprise. England invaded. The English King built a fort in Linlithgow. The events that inspired the movie Braveheart mostly happened. A hundred years later, fort burned down and a Scottish king built a place there instead.

Unfortunately, the burning down part wasn’t a unique event in the Palace’s history. After the Union of the Crowns, the Monarchy moved south to England. The castle fell into disuse. In a last swansong, Bonny Prince Charlie had a party at the Palace in 1745, so the Duke of Cumberland’s army burn it down in 1746.

Blackness Castle, however, was a prison. Often called ‘The Ship That Never Sailed’, this Castle is a short bus ride away from Linlithgow. However, the bus (which is actually more like a van) only runs four times per day, and often hours apart. If you take the 13:27 bus like I tried to, the return bus will pick you up at 18:30, roughly two and a half hours after the castle closes.

Somewhat forewarned by prior experience with rural buses, I arranged to share a taxi back to Linlithgow. When I arrived to find that the village was tiny enough that it had a single shop, I realised it might be the best £5 I would spend that day.

Blackness is well worth a visit for the views over the Firth of Forth alone. We’ve had recent snow storms and the snow had settled on the hills. On the other side of the castle, you can see the Queensferry crossings over the Forth. It’s easy to see why this was such a strategic site to hold. Anyone seeking to sail up to the port further along the Forth would be subject to its scrutiny.

When you add in an excellent lunch at the Granary in Linlithgow, and some quiet knitting time between lunch and catching the bus to Blackness, it was a rather successful and pleasant day.

I would probably recommend going to Blackness in the morning in order not to get stuck there. (There’s a 10:45 bus, I believe.) However, I’d probably recommend lunch in Linlithgow or a picnic as there’s not much in Blackness. Either place could probably be stretched into a full day at a more leisurely pace. There’s some excellent walks available at both.

I’d quite like to go back to Linlithgow and complete the circuit of the loch that I started this trip. It’s reasonably short at under an hour, and seems to have plentiful local dogs to pet. I think that might be the primary success of this trip: it’s started me planning future ones!

2 thoughts on “Cloud break at Blackness”