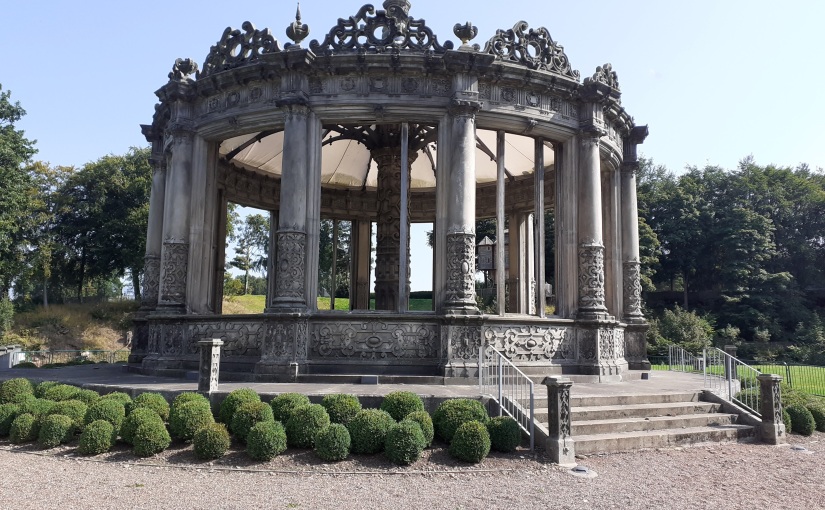 Time seems to be the most precious commodity at the moment. Every time I look at the date it sends a shock through me. Crikey! We’re into the final third of the year and the season is starting to shift here into a more autumnal tone.

I rebel against change. It’s an instinct that I fight because I know the importance of change. But, sometimes, a little pragmatic rebellion on one aspect can help sooth the panic of too much change at once. In short, a walk around Dalkeith Country Park was in order.

The weather, blessedly, held up for one day long enough to get a final summer walk in. We had blue skies and warm enough temperatures not to even need our raincoats and woolly jumpers. Now, a week later, these garments are rather more required. But Dalkeith Country Park is a site known for its rebellion against the weather.

The grand Orangerie sits in the grounds of the estate. Now open to the elements, the the 12-sided, intricately carved stone building would once have had enormous panes of glass in the windows. Huge boilers would have heated the space to a temperature suitable to grow oranges amongst other things, which is decidedly not typical of the Scottish climate.

Dalkeith Palace looks like something out of Downton Abbey. Amusingly, it has moved with the times and is used as the campus for the University of Wisconsin in Scotland which I imagine would be an excellent location to study. I wonder if wandering through the grand front door becomes normal after a few months?

We took the long walk through the grounds, covering about 8 km, through the woodlands and along the river. Some of the trees date back 900 years and the site itself perhaps back to Roman times. I’ve been enjoying my history lately and it’s interesting to run across the reminders of how the Lothian region was under Roman occupation at some points.

We ended up sharing the Park with a hoard of 80s rock enthusiasts out for a concert, which makes the whole day seem rather surreal in retrospect. Another small rebellion against the passage of time, perhaps. It felt like the Park had a good balance overall – the beauty and history of the Park has been maintained but it’s not going stale from lack of use. Given how easy it is to access via public transport or otherwise, it’s a wonderful day trip from Edinburgh.

I cast on my Spark Socks on the 1st September. They are rather further along than shown in the photo below. I sat and watched the first Harry Potter movie and suddenly I was at the heel turn.

I’ve got another sock nearly completed and plenty of knitting chat for next time so I’ll leave this as mostly ramble related.

One thought on “Dalkeith Country Park”

Leave a Reply to Knit One, Spin Too Cancel reply